Dia Mirza recently took to Instagram to announce that she was having a baby. She wrote, “Blessed to be…One with Mother Earth…One with the Life Force that is the beginning of everything…Of all stories. Lullabies. Songs.Of new saplings.And the blossoming of hope.Blessed to cradle this purest of all dreams in my womb Photo by @vaibh_r #SunsetKeDiVaNe.” While many people and celebs congratulated her, she was trolled for the timing of her pregnancy announcement. Also Read – Wild Dog Twitter review: Nagarjuna Akkineni, Dia Mirza and Saiyami Kher’s action-thriller has managed to live up to fans’ expectations

The actress was recently questioned about why she didn’t announce her pregnancy before her marriage break stereotypes as she did with a woman priest officiating at her wedding. She replied, “Interesting question. Firstly, we didn’t marry because we were having a baby together. We were already marrying as we wanted to spend our lives together. We discovered we were going to have a baby while we were planning our wedding. So this marriage is not the result of pregnancy. We didn’t announce the pregnancy until we knew its safe (medical reasons). This is the happiest news of my life. I’ve waited for many many years for this to happen. No way I would hide it for any reason other than medical.” Also Read – Before Kirti Kulhari-Saahil Sehgal, THESE 8 Bollywood couples parted ways after getting married 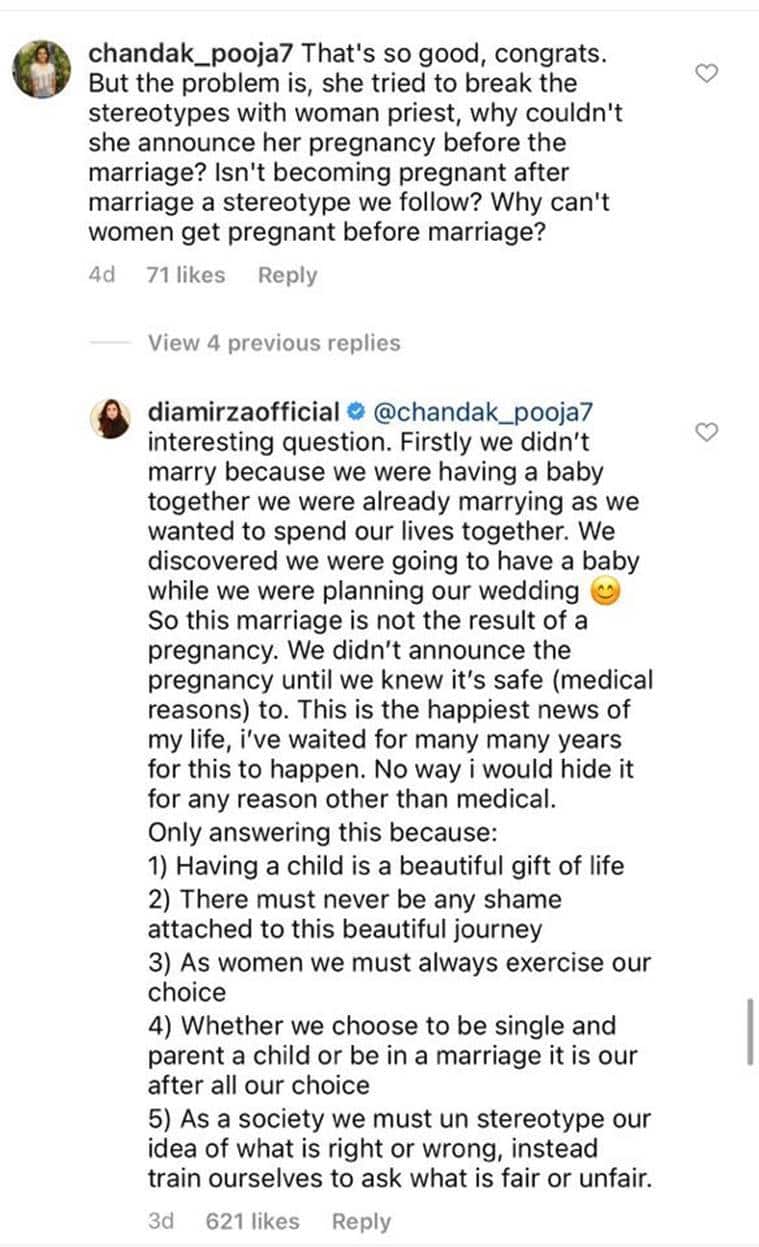 She also spoke about stereotypes and wrote, “Only answering this because: 1) Having a child is a beautiful gift of life 2) There must never be any shame attached to this beautiful journey 3) As women we must always exercise our choice 4) Whether we choose to be single and parent a child or be in a marriage it is after all our choice 5) As a society we must un stereotype our idea of what is right or wrong, instead of training ourselves to ask what is fair or unfair.”

Dia married businessman Vaibhav Rekhi in February. She was earlier married to Sahil Sangha and in August 2019, they announced their separation.